Condé Nast Traveler recently named Amelia Island one of the “10 Best Beaches in Florida.” And, while it’s known for its 13 miles of white sandy beaches, the fun doesn’t stop there. With an average temperature of 69 degrees, residents enjoy year-round outdoor activities on Amelia Island. Bordered by the Atlantic Ocean to the east and the Intracoastal Waterway to the west, Amelia Island is a water lover’s paradise. Boaters can anchor off Cumberland Island National Seashore and admire the wild horses that grace the shoreline with their magnificent presence.

Want to catch the “big one”? Residents can cast a line on shore or head to the deeper waters of the Atlantic Ocean for an offshore fishing excursion. The Intracoastal Waterway and the nearby Nassau River and its tributaries are great for navigating a kayak, paddleboarding, jet-skiing or simply enjoying local marine life.

Want to hit the links? We’re home to 127 holes of world-class golf, including The Golf Club of Amelia Island at The Ritz-Carlton, Amelia Island; Omni Amelia Island Plantation; Amelia River Golf Club; and the city course, The Fernandina Beach Golf Club – one of the most popular municipal golf courses in the Southeastern United States.

Located near the Atlantic Rec Center Auditorium and next to Egans Creek is the Pirate Playground, a community-accessible playground that integrates exercise, art, nature, music, imagination and local history for children of all physical and mental abilities. Nestled along the Egans Creek Greenway is the recently renovated Egans Creek Park. The park includes a meditation labyrinth, pet-watering station, bird-watching platform, fishing dock, kayak launch and quarter-mile track that includes universally accessible exercise stations.

Amelia Island plays host to the Petanque America Open, where players from around the world come to enjoy one of America’s fastest-growing leisure activities. As one of Europe’s most popular outdoor games, petanque is a cousin to both horseshoes and the Italian bowling game, bocce.

From biking trails to beaches, Amelia Island has something for every member of the family. 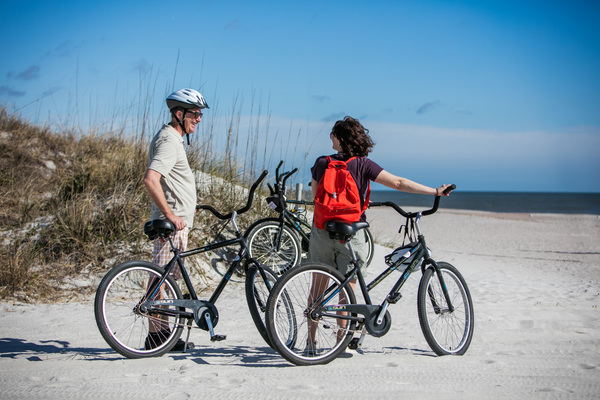